In case you couldn’t tell, I enjoy learning things about Mongolian script. I find different writing styles, particularly those that are not as widely used across the globe, to be quite interesting. Mongolian has quite a colorful history, seeing many different types of script developed over the years. I noticed a poster for the Mongolian literature department in the hallway and had some assistance in translating it. The results are a brief history of Mongolian script. 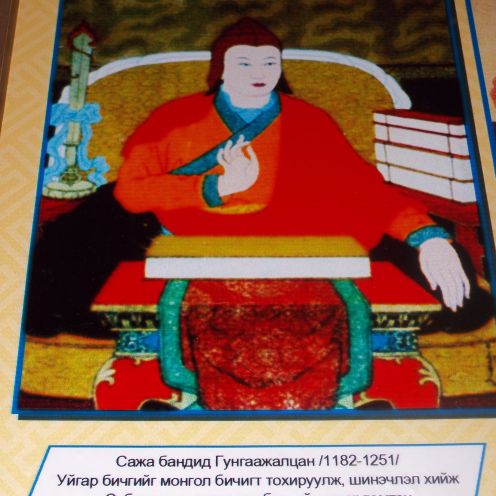 This is the script that Chinggis had commissioned to be developed. It was used widely from 1182 through 1251, a good twenty years after the death of Chinggis. It’s a vertical script with different characters depending on if it starts the word, is in the middle of the word, or ends the word. The gentleman pictured created the script from the Uigar (Uygur) script. A more detailed description may be found in my post here.

In 1262, a monk by the name of Pagva created a block script at the behest of the Great Khaan Khubilai (Kublai Khan, to us in the West). This script is still in use today, although it seems to have been relegated to a more ceremonial role than a practical one. Students still study this script, however, and it can be seen on many monuments and in government buildings.

In 1587, many, many years after the dissolution of Chinggis’ empire, there came a man by the name of Guush Ayosh. He created this Ali Gali script in order for Mongolians to more easily write foreign words. My teachers seemed a bit baffled about this script’s existence. It goes to show you that there’s still so much you can learn, even about your own culture!

Zanabazar. He was a busy man for his time. In 1686, not seemingly amused with the Tod Script, Zanabazar created his own form of writing. The first character in the script, known as the Soyombo, still endures as a traditional Mongolian symbol, and a source of national pride. The script, however, didn’t last as long as its penultimate character.

And there ends the information on the poster. It’s fascinating to see how languages change and develop through the course of history.