Osaka is a pretty big and bustling city. I visited there once, briefly, back in 2010 with a friend of mine while I was living in Korea. I remember watching the winter olympics in a Korean hostel in the area of Shinsekai, known as a rougher part of the city. It seems to have calmed down from its more dangerous days, and on a recent trip, I got to see it once again. That, and Dotonbori. Oh, Dotonbori…

This area has had a lot of bad luck: bankrupt businesses, bombings, and organized crime. The area was designed to be a little bit New York and a little bit Paris, but kind of fell short on both fronts. I assume the Tsutenkaku Tower is supposed to be the Eiffel Tower of the Paris area, and I can see the way the streets are designed to emulate France, but it may have been a bit too ambitious.

The Mrs. and I didn’t spend much time here; most of our foray was shortened due to an extended stay at Spa World. Regardless, something here that I remember was still alive and well: The whacky signage for shops. These things left such an impact on my that I still remembered them eight years later. The one takoyaki shop’s signage is so iconic that our hotel, The Moxy, had it as framed art in our room. 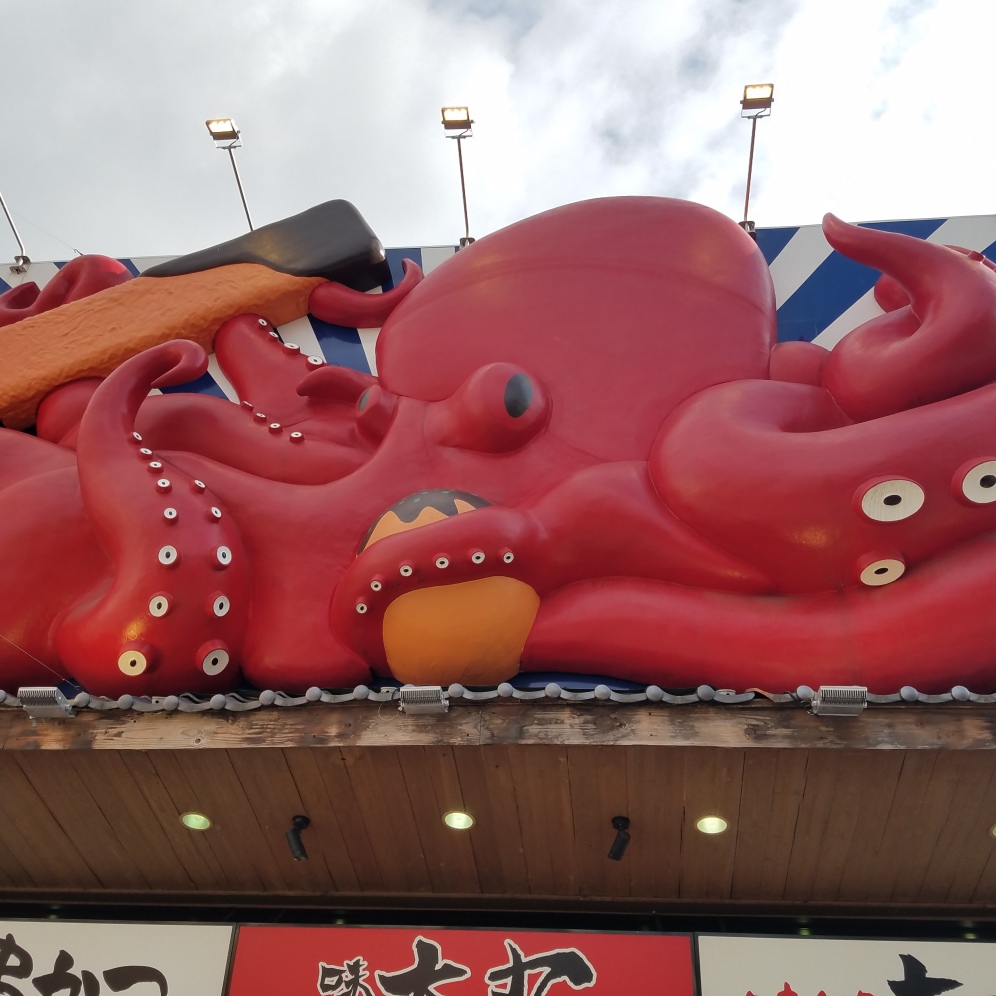 This guy is famous! And very large in person! 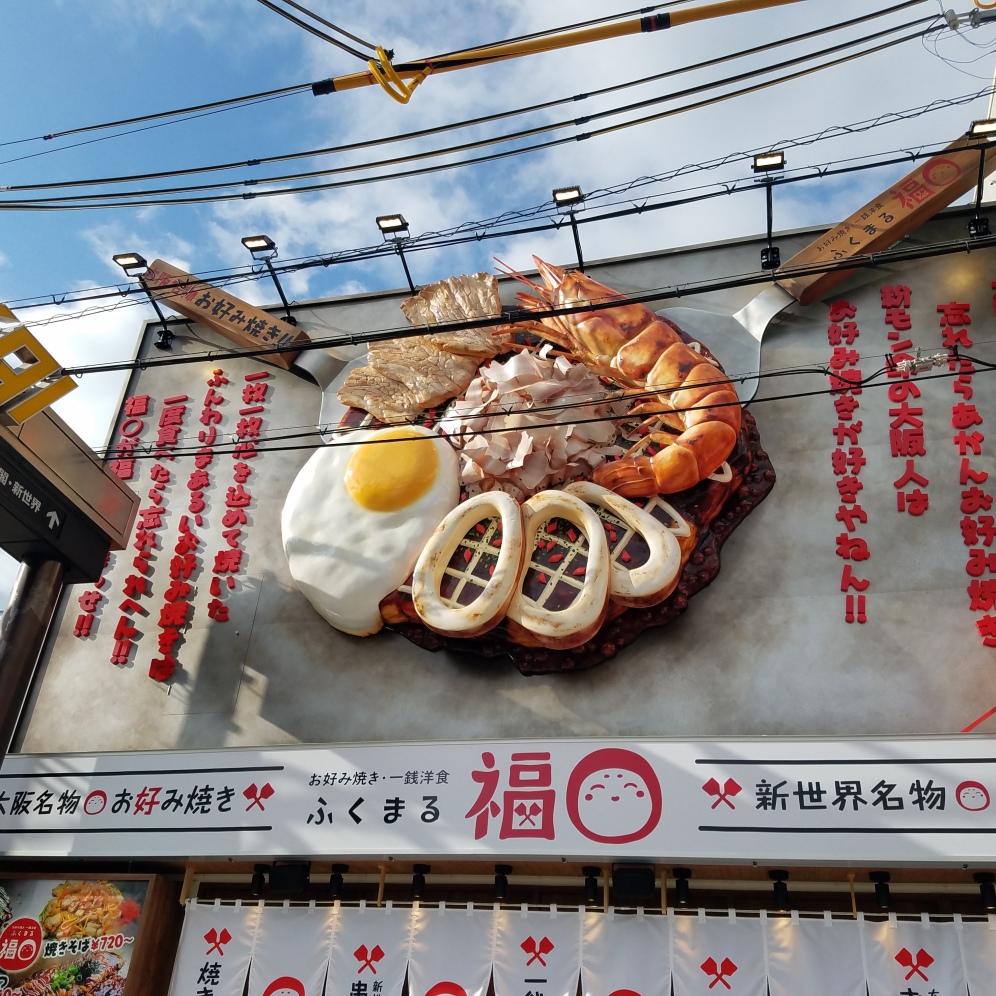 Okonomiyaki, a kind of seafood pancake, is really popular and famous here

The area is also famous for Kushi Katsu, or fried everything on a stick. We didn’t get to partake this time, but I remember the amazing lotus root, cheese, and vegetable skewers I was able to eat the last time I was there and I look forward to getting them again the next time we visit. Before we even left Osaka, we assured ourselves we would be returning.

A bit of history before I give you the skinny, of course. It started as an entertainment district when those in power adopted urban planning back in the 1600s. Once all things Western started to captivate the Japanese people, however, these establishments began to shut down. Only five remained until World War II when, you guessed it, they were bombed and destroyed. Are you sensing a common theme when I discuss the history of places in Japan?

Here’s the skinny on Dotonbori: It’s the most famous area in the city for tourists to visit, just a few blocks up the road from Ame Mura. Let me tell you, it is packed when it is tourist season. Crowded chaos is the only way I can think to describe it. We swam through the hot, sticky air, checking out some local eats before heading the the river.

The river area is easily the best area of Dotonbori: You can do themed boat rides, stroll and enjoy the water, or pull up a chair and one of the man riverside cafes and eateries. My wife and I stumbled upon an idol show by Kamen Joshi, a girl group that wore Jason masks and had breakdowns of screaming in their songs, complete with head banging. All of this, mind you, while they’re wearing these painfully bright neon dresses. We grabbed a beer and a highball respectively and sat down mere meters almost directly behind them and watched the show. I admire their uniqueness and their ability to dance and sing in that oppressive heat. 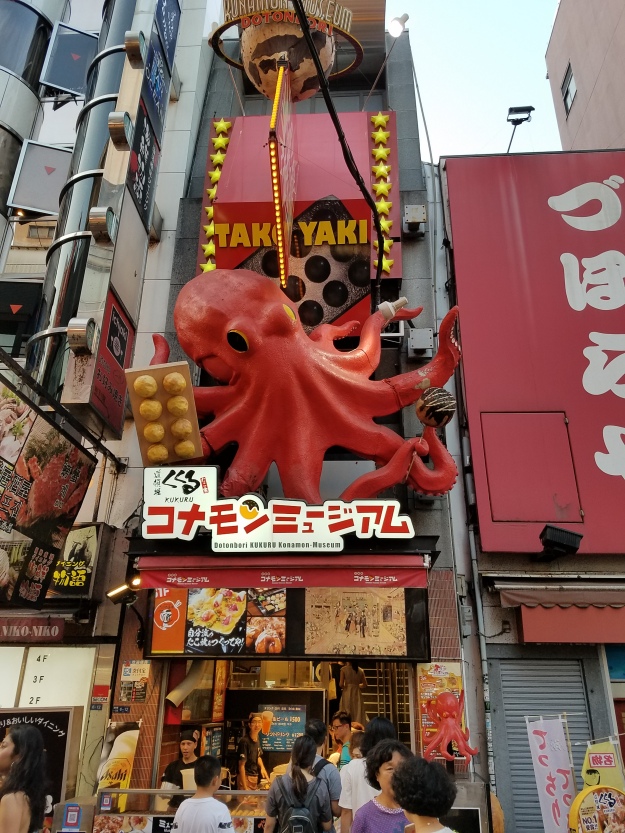 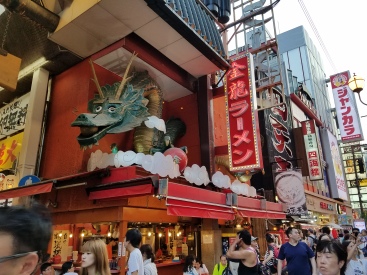 Looks a little goofy, but I’m sure the ramen is great! 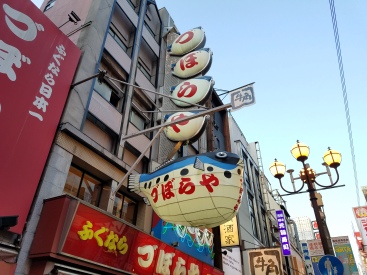 For the bold, there are also lots of places with pufferfish (ditto for Shinsekai) 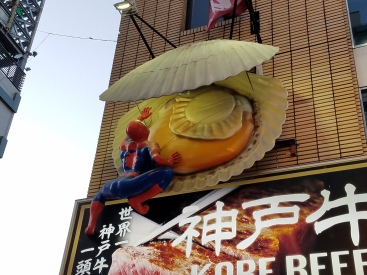 Your guess is as good as mine 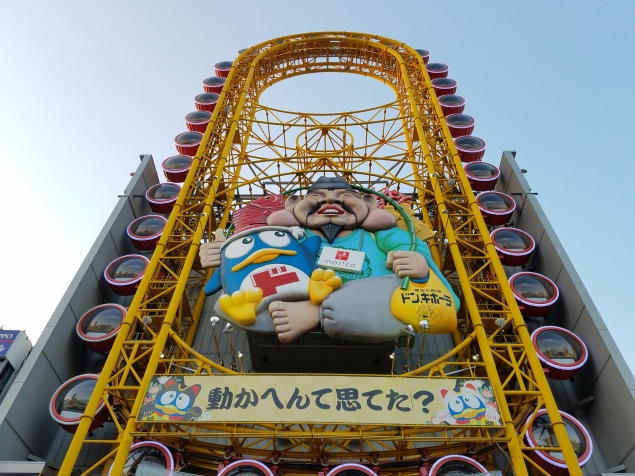 There’s too much to explain with the iconography but doesn’t it look grand? 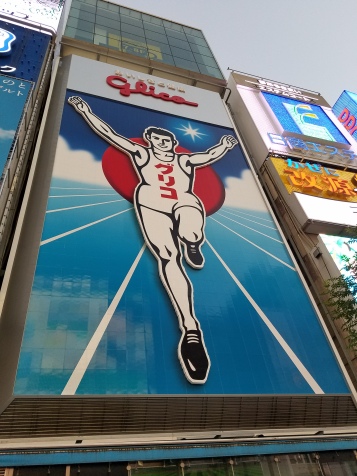 Only a true champion of the track could pull off that outfit, am I right?

People come here because of the insane signs, good eats, and iconic sights. This is where you’ll find the Glico Man and the Don Quixote ferris wheel… oval? In addition, there are the whacky, detailed signs and billboards advertising restaurants. They all began the outrageous arms race in the 1960s when the crab restaurant Kani Doraku upped their game with a giant mechanical crab that is around 6 meters strong. It can do it all: Move its arms, eyes, and legs. You’ll see a variety of other signs in the area that try to capture the magic of the Kani Doraku crab. Seeing all the dragons, dishes, and giant animals is half the fun of visiting the area.

If you go in summer, prepare to be hot and fighting crowds. I don’t think it helped that this summer, the summer I went, was one of the hottest summers ever recorded in Japan. Heat waves, heat strokes, the whole deal. I’m sure it’s just as lovely in fall, spring, or the dead of winter. Either way, it’s a feast for the eyes (and the stomach!) and if you aren’t claustrophobic, it’s definitely worth a peek.