The train system here in Japan is probably the best I have ever encountered in the world. Its network is extensive, it’s easy to use, and it makes not having a personal vehicle not such a big deal. When talking about trains with those outside of Japan, they usually know about the high-speed bullet trains and one other thing: Train perverts. Let’s take a quick look at people who are ruining this wonderful system for everyone by putting others at risk.

This is the one that seems to get the most negative attention. These people, known as Chikan in Japanese, take advantage of the very crowded conditions on trains to grab women without their consent. Not many people say anything about their behavior as it happens due to the culture’s tendency to avoid escalation of difficult situations, leading most to keep to themselves and trying to ignore it. Plus, the process of reporting a Chikan is arduous: You have to get off the train, find the authorities, file a report, and make sure you can describe the person well enough to make sure they’re caught. Oftentimes it’s so crowded it can be near impossible to tell who exactly is touching you. Even more often, these victims are already on a time crunch, trying to get to work or appointments that they can’t miss or be late for.

Anti-chikan poster at a local station. I believe it says “Everyone is watching” 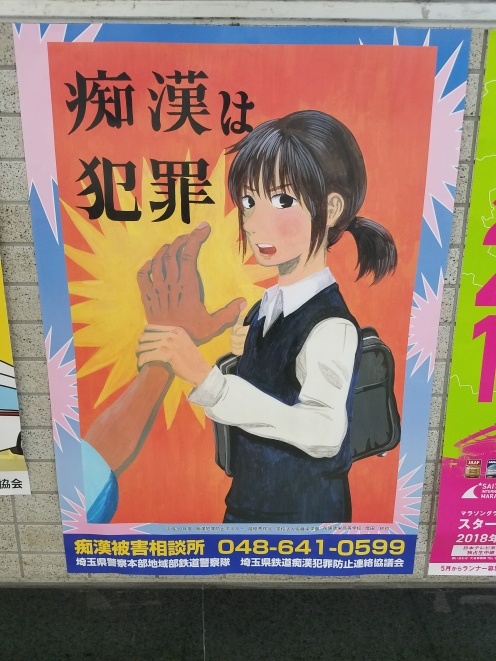 Anti-groping poster at a local station

A lesser-known and relatively new kind of terrible gaining media attention in Japan are butsukariya, or bumpers. They are men who will intentionally find women to run into in the stations, using the cover of crowds and the excuse of “everyone gets bumped around anyway” to target women who are otherwise minding their own business. FNN ran a story about it after an ordinary person followed a butsukariya and recorded him as he ran into woman after woman. As if crowded stations weren’t bad enough, now there are jerks body checking women for no reason.

What are they doing to stop these people?

For those of us who find this all dismaying, fear not! Railway companies have taken note of the complaints and media attention and are looking out specifically for such behavior. There have also been plenty of poster campaigns and women-only cars during rush hour to combat Chikan. There have also been some not-so-successful attempts, such as the anti-chikan sticker released back in 2015 in my own Saitama prefecture. Needless to say, those didn’t last long.

And if you’ve ever wondered why Japanese cell phones make very loud and obvious shutter noises when they take any sort of picture, it’s because of Chikan. The fear of invasion of privacy in public places (most visibly in the media was secret upskirt photos on crowded trains), many phone manufacturers made the loud sounds mandatory on all phones with companies they partnered with. There’s a misconception that it’s the law, but actually, it’s not!

JR East is also now installing cameras into trains, which should help to catch anyone committing these crimes and help to encourage women to report incidents.

The trains in Japan are wonderful, but they are not without their problems. These problematic men are a very small percentage of the commuting public here in Japan but their actions send ripples throughout the culture and everyday life.