Follow my blog with Bloglovin
Posted on February 4, 2018February 1, 2018 by adamgarnica

When you tell people you are visiting Nagano, they will ask you if you’re going to ski or snowboard. After you tell them you aren’t, there is a small chance they will ask if you are going to see the snow monkey park. Every time you see snow monkeys hanging out in hot springs set against a snowy backdrop, there’s a pretty good chance those photos came from Jigokudani Snow Monkey Park about an hour outside of Nagano.

The park was founded by a Japanese gentleman who wanted to put aside land for the snow monkeys, who were losing habitat due to expansion of human activity. Now, the park is a second home to the snow monkeys. Outside the park itself, on the trail up, you can see signs that inform you of a snow monkey’s typical day: forage for food in the morning, come down to the hot spring during the day (where they are fed copious amounts of food), and then return to the mountains to sleep. They rarely sleep in the same spot twice and usually sleep in difficult to traverse areas, such as mountain faces, to deter predators from attacking them.

To get to the park, you need to take a bus from Nagano station (there are plenty of signs in English telling you where to go and the staff will help you out if you’re lost; the name in Japanese sounds just like the English, so fear not!). You can take a train and then a local bus, but the express bus is the way to go. Bonus tip: Get the Snow Monkey day pass. It will cover all of your travel expenses to and from, park admission, and then any additional transport you require in Nagano city for around 3000 yen per person. Once you get off the bus, express or local, you have a 30-minute walk to get to the park. It’s a bit steep at first, but levels out after the first .4 kilometers (first quarter mile). The walk out in winter is beautiful: rushing rivers, perfectly powdered tree branches, and the occasional peeking of the sun through the clouds. 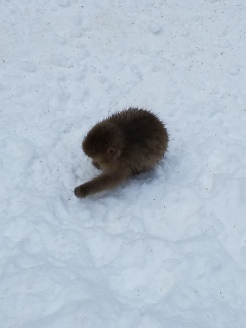 A little guy picking up some food from the snow.

A shot from the bottom of the first set of stairs leading into the park. 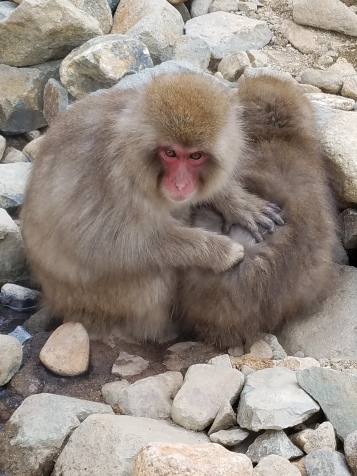 I think they come down to watch us, too!

The guy on the right was very relaxed.

When you enter the park, you go through a main building and then into the area where the monkeys play. You can see them warming up on water pipes, grooming in shallow pools, and soaking in the main spring well in the very back of the park. The sulphur smell is a bit intense, which took my by surprise when I first entered the spring area. The monkeys will run around, darting past you and lounging without many cares. The park gives you all the rules for friendly interactions with the monkeys, so as long as you follow the rules, you’ll have a great time. The humans you’ll be with will mostly be taking photos of the monkeys; large clusters of people lurk about to find that perfect monkey shot.

After you visit the park, don’t forget to stop into The Farmhouse, a small restaurant and craft beer establishment less than a minute from the bus stop. They have a tap room for Siga Kogen / Tamamura-Honten Brewery, a sake brewer that start crafting beers in the last 20 years or so. If you want to do a sake tasting, head into town to their small tasting room. Otherwise, get your beers here. My wife and I made the mistake of trying to visit the brewery in town, only to discover that The Farmhouse is the main taproom for the beers. They have great food and it’s a nice way to cap off the day before catching the bus back (make sure you line up early, or the bus may fill up and you’ll have to wait another hour for the next one).

Overall, if you like monkeys and watching them play around, this is the perfect spot for you. It’s a nice trip out there and a very unique experience with the local nature I don’t think you can get many other places. If you’re in Nagano, definitely give it a visit!