Follow my blog with Bloglovin
Posted on October 8, 2017September 25, 2017 by adamgarnica

One of the unforeseen perks of my current job is that I sometimes get to travel to different regions of Japan to help recruit students. In the summer, I got to go to Kumamoto and Kagoshima. This fall, I was able to go to Fukuoka. I usually get one night in a hotel and a flight the next day, giving me about six hours to explore the city before I need to head back to the airport. Here’s a brief recap of what I was able to accomplish with one (very) short day in Fukuoka.

One of the many stone walkways

Where they think the castle stood. Great view of the city from here!

Here’s the thing about castles in Japan: You’re usually able to spot them a mile away because they have one massive tower in the center. Fukuoka Castle no longer has that centerpiece. In fact, much of the castle has been wiped clean due to the march of time (and bombings). The castle grounds now include a small welcome center and tons of lush green sports fields. When I was there, there were several baseball games and junior soccer matches going on. I thought that was a great reimagining for the castle grounds. Not many can say they played soccer in a castle compound! The other interesting note is that used to think that Fukuoka Castle never had that huge tower but now they’re finding notes and records saying it was there. Regardless, you can climb the site where they think it was. Otherwise, it’s a nice park-like area you can stroll around in. Also, it’s 100% free! 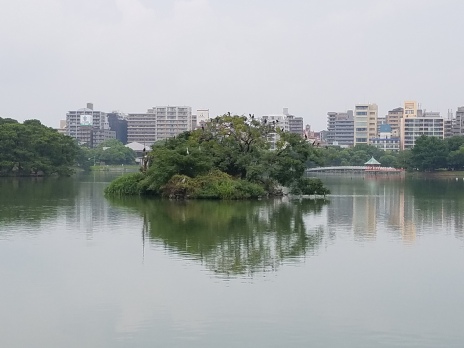 A view from the first island bit 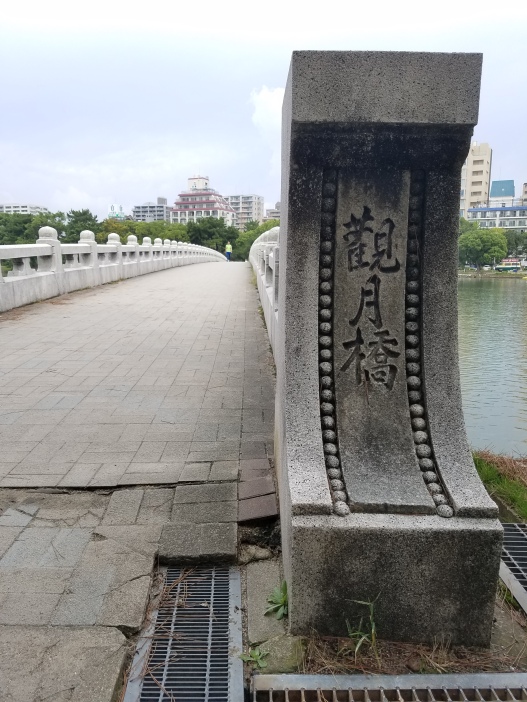 One of the bridges leading to the central island

Just across the street from Fukuoka Castle is Ohori Park, a nice big public park with a huge running tack that circles a massive pond/small lake at its center. You can rent swan boats to paddle around in but the real interest is the island in the center of the lake. You can walk over nice bridges and enjoy some real peaceful (and narrow) landscape on that small island. When I was on that island, I got to see an older man practicing some traditional singing, a Shiba-Inu walking itself, and a full-on production crew recording a scene for a TV show. It’s very peaceful and serene and so very close to Fukuoka Castle, so it’s easy to include this in your day trip. Just like the ruins, this is completely free!

A nice canal in the Hakata area of Fukuoka 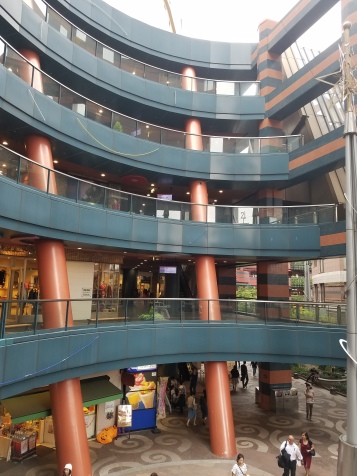 Just a sliver of the massive shopping complex

This is a massive shopping complex a few subway stops (or a short bus ride) away from Ohori Park towards the airport. This shopping complex has a movie theater, a performing arts theater, two hotels, a massive Taito Station(arcade), restaurants, and more shops you can shake a stick at. There is a big artificial canal that runs through it all, adding a nice, soothing water symphony in the background. Most of the shops are pretty upscale and expensive, so shop at your own discretion. Free to visit but not to shop! It costs about 200 yen to get from Ohori Park to Canal City by public transit (you can take a city bus or the Airport Line subway towards the airport).

I wanted to talk about my trip, but seeing as I didn’t have much time at any one spot to give it a full post of its own, I thought this was a good compromise (albeit slightly longer than I like for my posts). I hope to get more time in the future to explore Fukuoka and Kyushu as a whole. If anyone’s been, feel free to leave me a recommendation in the comments!