Just off of the coast of Kamakura, south of Tokyo, lays Enoshima Island, a small island that hosts many interesting man-made and natural beauties. One rainy weekend during summer, I was able to make a stop on the island for my wife’s birthday and get a little taste of what the island has to offer.

Ryuren no Kane, Bell of Love

One legend looms large over Enoshima island: That of the bell of love towards the far tip of the island atop the appropriately named Lover’s Hill. Legend has it that there was once a terrible dragon who caused mayhem and destruction if sacrifices were not met from the locals. One day, the goddess Benzaiten appeared from the heavens and rose Enoshima island from the sea. Smitten by the appearance of the goddess, the dragon vowed to stop his evil ways in exchange for the goddess’ love. She agreed to his proposal and they got married. The dragon eventually rested his body on the island to watch over Benzaiten, where he protects her to this day.

While we weren’t able to do everything the island had to offer, due to time constraints and inclement weather, we did get to see some very interesting sights. When you first arrive, there is really only one road you can trek down. It rises up to the main temple on the island, famed for bestowing good luck in matters of love. You have to climb a lot of stairs to get around the island, although you can pay to use an escalator system to get from sight to sight. I recommend walking up the stairs; there are a ton of great vistas and views of the coast and ocean you’ll bypass if you take the escalators. 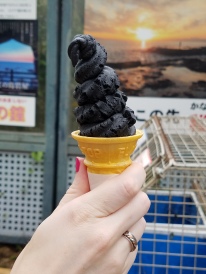 There are tons of tiny shops and restaurants that dot the main road across the island. We got to eat lunch in a very nice restaurant that had a killer view of the island and the ocean outside. We also got to try some local Enoshima beers. I highly recommend Enoshima Beer (Kamakura Beer Co.): It’s a kölsch that has a wonderful flavor with a nice bitter punch at the end. You’ll see the iconic blue label with the turtle on it at shops and restaurants all across the island. We also got to try a local specialty: Black vanilla ice cream. The shop selling it was on a popular Japanese TV program, so we decided to stop in and try it. It’s a super thick and tasty vanilla gelato, and it’s worth what you pay! Our final meal was at a super modern and hip restaurant hidden in the alleyways off the main road called Enoshima Torico. Their sandwiches were amazing! I would highly recommend you stop in and pick up some chicken from them.

There is a ton to see on Enoshima Island, and I will definitely be going back to explore the island more.