Last weekend, I was fortunate enough to be invited to a closed event for sake tasting geared towards a more international crowd. The event had a lot of great information and free sake for the tasting. I’m not a big sake drinker, and didn’t know too much about the drink outside of popular culture, but I went in with an open mind and a cleansed pallet. Here’s what I learned from that evening:

Every bottle of sake uses rice as its main grain for fermentation. How pure the rice is can determine the type and quality of the sake. They measure this with a percentage that tells you how much of the original fibrous coating is left on the rice grain. Your typical brown rice would be 100%, since all of the casing is on, while most white rice would be around single digits, as the husk around the grain has been cleaned off thoroughly. For example, Ginjo Sake, a sweeter blend of the brew, will use rice that has 40-60% of the coating remaining. If you want a really good quality sake, you’ll also need to look at the color. A yellowish-green color is great, but if its brown and cloudy, keep away! Most professional tasters use special cups with blue circles in them to help them judge the color of the sake.

There were representatives from business, universities, and embassies all in attendance. We started in a large expo area where literally hundreds of bottles were set out with taster cups ready to go in front of them. Everything was arranged by sake-brewing region and almost every prefecture in Japan was represented there. You tasted the sake by taking a bit from the large cup through a small dropper and into your personal tasting cup. From there, you could check color, aroma, and flavor. The friendly staff tried their best to remind visitors that they could spit out the sake to avoid getting intoxicated, but you could tell a large portion of the crowd was there to imbibe. 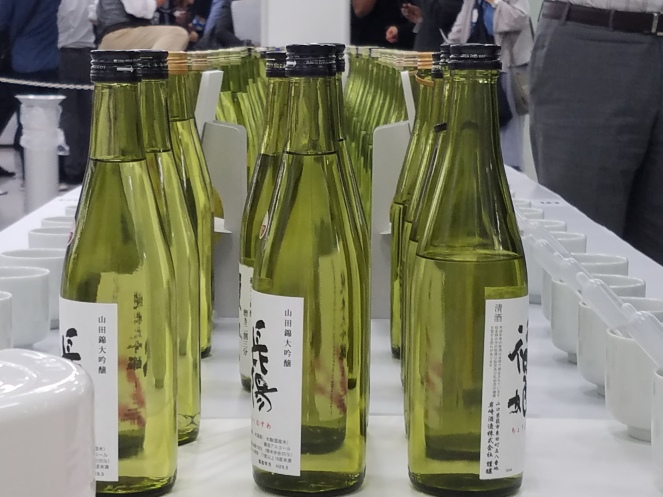 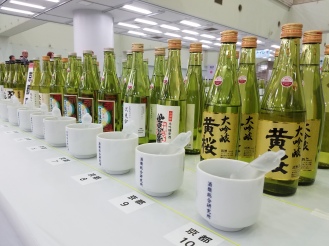 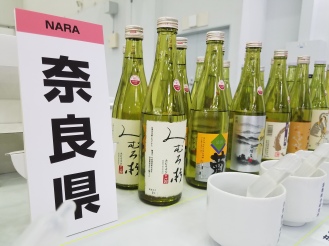 The second part moved us into smaller ballrooms where we could try specific bottles with longer flutes. This part was where you could get your drink on, so to speak. You were given a flute full of sake when you arrived, and everyone crowded around the stage (and many more around the covered hors d’oeuvres) to watch the traditional opening of a sake barrel to officially start the sake fair. Ambassadors from the Marshall Islands and Liberia joined the 2016 Nobel Lauriet in Physiology and Medicine and a few sake dignitaries to smash open the lid with tiny wooden mallets. Everyone cheersed (kampai!) and the social hour began. I kept it low-key and tasted sake with my friends, gathering a few cards for the sakes I tasted along the way. Some were definitely of better quality than others, and you could really taste that as you went along.

Overall, it was a great night. I’ve warmed up a bit to sake and I know better now what to look for in the drink. It is a unique part of Japan that I’m glad I was able to get an in-depth look at.