Flagstaff is a great city in Arizona: There’s tons of nature and a lot to do and see within the city itself. As someone who likes to explore and try new things, I was delighted to see that so many of the attractions in downtown were within walking distance. The craft brew scene in Flagstaff is also pretty amazing and I was able to visit quite a few of the breweries there. I’ll do a quick run-down of each and some beers there I enjoyed during my visit. 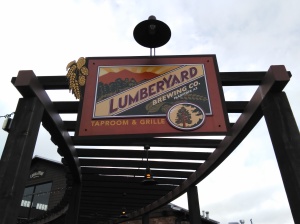 One of the larger and more commercial breweries in Flagstaff, it’s hard not to visit this brewery. Located on San Francisco St, it’s got a large indoor and outdoor seating area and full kitchen.

This place has a great selection and because they distributed across the state, it’s much easier to find their brews outside of Flagstaff. The Railhead Red is a great, solid red ale that you can’t go wrong with. Also, their Knotty Pine Pale Ale is a crisp, not-too-bitter pale that you can sip throughout the day.

Up the street from Lumberyard in a courtyard on Route 66, Flagstaff Brewing Company has a great selection of beers and a cozy feeling at the bar. There is a separate room in the back where you can occasionally catch live music.

They do collaborative beers with other local brewers, such as the Flagnificent 7, which is delightfully unique. I also found the Bitterroot ESB to be a tasty, drinkable beer.

In the opposite direction from Lumberyard, down San Francisco St., is the tap room for Historic Brewing Company. It’s cozy and located next to a restaurant and coffee shop, tucked away slightly in back. Great atmosphere and a big selection on tap.

This place has a great selection; probably my favorite in Flagstaff! Their Deer Lord altbier is truly a treat, as is their Joy Ryed rye beer. The top dog there, however, was the Grass Fed Golden Ale: delightfully crisp with an amazing flavor!

Down a few streets from San Francisco St. is Beaver St., where this brewery and restaurant live. It is split into two areas: a family restaurant and a 21+ bar area with pool tables. Big menu selection and a small smattering of brews from the brewery.

This place was probably my least favorite in Flagstaff. They’re not bad, but there wasn’t much in the place that really spoke to me. Their Summer Shandy is pretty tasty and light and their Red Rock Raspberry Ale, a type of beer I usually dislike, was actually pretty mild and palatable!

Up past Route 66 on Beaver St. is Dark Sky Brewing Company, an open brewery specializing in dark beers. You can smell the mash all throughout the tasting room. They have a small menu of items you can snack upon as well. Fun Fact: If you bring your lift ticket from Snowbowl, you can get a 10% discount on your bill!

Lots of hip-hop themed beverages! This place also had a fruit beer that I found enjoyable: the Rouge De Fleur with its hibiscus hints in there was surprisingly delightful! The Bear Jaw Imperial Cherry Brown also had a great flavor that wasn’t too sweet from the cherry. The best beer there for me, however, was their Mountains of Mosaic IPA. It has this amazing citrus flavor that isn’t like anything I’ve had before. So tasty, but incredibly bitter, so beware!

Shout out to Mother Road Brewing, as they were the only brewery on my list I wasn’t able to visit, but if you like IPAs, try their Tower Station IPA.

What are some of your favorite local brews? What would you recommend to people visiting?