I’ve never really been much of a sports nut growing up. In my adult life, I’ve been slowly warming up to the idea of participating more in the spectating aspect of it all. I don’t have any teams by any stretch of the imagination. Whenever I can go to a live event, I will go, because there’s something empowering and electrifying being around people who are really into the sport. When a friend of mine asked to go with him to a free hockey game, I wasn’t going to pass it up.

The opening show for the hockey game was somewhat insane; I haven’t seen anything quite like it before. The stadium went dark and the lights, in the team colors, started flashing all around while this huge drum boomed in the distance. Over the loudspeakers screamed the howl of a wolf (long and deep, whereas coyotes do more of a laughing yip, but who am I to judge?), at which point, I kid you not, every Coyotes fan in the place started howling at the top of their lungs. The team began skating out, the lights were flashing, howls were filling the stadium, and this huge Coyotes drum descended from the rafters, shooting smoke from valves that were placed all around the edges. It was one of the most intense sports openings I think I’ve ever seen. Kudos for the Coyotes for knowing how to get the crowd going!

The visiting team was the Florida Panthers, and my friend was filled with tons of knowledge about hockey. His excitement was seeing the Panthers player Jaromir Jágr, a tall figure from the Czech Republic, where my friend has spent a good deal of his life living and working. He told me all about him: How he was the youngest player to enter professionally and is now the oldest in the league, a feisty 44 years old, and how he still plays because he might have a gambling problem. His accomplishments in the sport were dizzying: He leads the league currently in points scored and is second overall for lifetime points in NHL history.

Watching the action of the game was nuts: There was no stop to the action. Players would jump in and out in an incredibly streamlined fashion. Compared to stop and go sports like American Football and Baseball, I found this quite refreshing. The players’ athleticism on skates was also something to behold: As someone who has never been on ice skates, I have a lot of respect for how quickly they glide across the ice. And the sounds of it all! The ice skates make this beautifully satisfying cutting sound (if you’re lucky enough to be within earshot). The Coyotes ended up winning in sudden death overtime, so the stadium was filled with jubilation when we decided to leave. 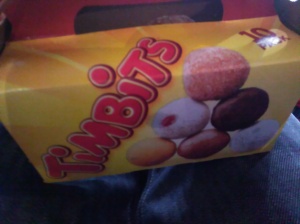 I would be remiss if I did not mention the Canadian donut chain Tim Hortons. My wife is a huge fan and she can’t be alone: Almost every major hockey arena in the USA has one, and Arizona is no different. I tried some Tim Bit, tasty little donut holes that come close to a dozen in a box for $3. They were delightful, but I was a little disappointed: Of all the pictures of donuts on the box, I only received three varieties (regular glazed, chocolate glazed, regular). The prospect of powdered and jelly filled got me excited, but upon noticing their absence, I felt let down. The ones I got were still good, though, but nothing life-changing.

It was a great experience. I hope that I am able to see some more live games in my future!