Comic book conventions have come a long way since their inception. Now, they are more a celebration of several different “geek” interests: Anime, video games, comics, fantasy, sci-fi, steampunk, television, and movies. In Phoenix, I was lucky enough to visit the annual Phoenix Comicon in spite of the 117-degree weather.

Phoenix Comicon is still relatively small, compared to big ones like San Diego, attracting around 90,000 visitors this year. My one regret was not collecting pictures of cosplay, or costume play, where people dress as their favorite characters, time periods, or universes. There were some really incredible ones this year, but sadly, crowded halls and a busy schedule kept me from capturing them on film. Let’s see what I did get to see.

Diana Gabaldon is the author of the Outlander series of novels, in which a young nurse from post-WWII Scotland is sent back in time to witness history. The books now have a TV counterpart on Starz, which is currently in its second season. We saw Diana last year and were able to walk in with no lines. This year, however, there was a huge wait time and the room was full.

Diana herself is a very smart and witty person, sharing details from her time visiting the sets and being involved with the TV show as a consultant. She talked about how all the moving parts of a TV show came together and how she learned that when there are conflicts with schedules, shoot times, inclement weather, and so forth, the script is the first thing to be changed. It goes first because it doesn’t cost money to change the script to fit the shoot schedule. It was all very entertaining and enlightening. Even if you haven’t seen her show or read her books, you’ll walk away from her talks feeling as though you’ve learned a lot.

One thing I didn’t expect to see was a car show at a comic convention. Outside on a shaded street were a variety of cars from TV shows, video games, and movies (at least, most were fan-inspired and not official). The promoters for the new Ghostbusters movie were there with coolers full of Ecto Cooler and not one, not two, but three Ghostbuster mobiles. There was also a local chapter of a Mad Max association there with their post-apocalyptic war machines, which I’m sure they use to tear through the Sonoran desert on the weekends. 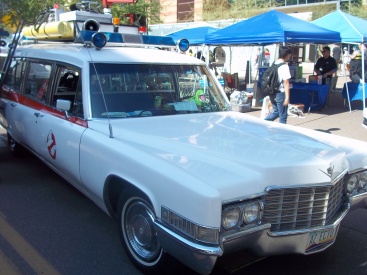 Overall, if you’re in the area and you don’t mind the crowds, I would recommend you come to Phoenix Comicon. It’s pretty relaxed, inexpensive, and a great way to explore the culture.