I’ve noticed that I’ve been getting lots of traffic from search engine searches on Mongolian symbols. My friend told me that she was looking for some info on a particular symbol, and my blog came up in her search, but that I didn’t have the symbol she was looking for. With that in mind, I decided to investigate a little more, and include some more symbols that I didn’t in my previous post.

This is a very common symbol. In fact, it’s the symbol for the city of Darkhan. The two circles symbolize marriage, and the pattern is designed for men to wear. It’s commonly found on fences, gates, and all types of clothing.

Similar to the King Pattern, but for women. It holds all the same symbolic meaning. Instead of circles, you will see that they are diamonds instead.

This is a common Tibetan Buddhist symbol, and since Mongolia has a long history of camaraderie with Tibet, it’s not surprising the symbol found its way to Mongolia. It symbolizes “skillful means,” and is considered to be a masculine symbol. Its counterpart, the Ghanta (bell), is feminine, and symbolizes “wisdom.” The Vajra is found on monuments, in temples, and on special framed gifts.

The Wind Horse represents the soul in shamanism. Khiimor literally translates to “gas horse,” but I’m told it can also be used colloquially for “soul.” It was also absorbed into Tibetan Buddhism. In Tibet, the animal represents well-being and good fortune. This animal can be seen on flags and government buildings all across Mongolia, where the Soyombo is incorporated into the horse’s body. 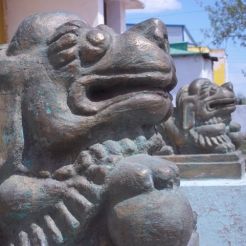 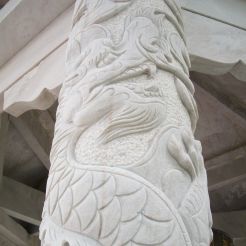 These sacred animals are found in many parts of Asia, and they are found in Mongolia as well. In Tibetan Buddhism, they are referred to as the Four Dignities, and share a close relationship to the Wind Horse.

The Garuda, or Khangard (хангарьд), is the spirit of the Bogd Khaan mountain range, and is the symbol of Ulaanbaatar. It is a symbol of honesty, courage, and freedom from hopes and fears. It is said to abide in the North and is associated with fire. You can see the Garuda in framed decorations and symbols for various businesses.

The Dragon, or Luu (луу), symbolizes an enlightened state: one with their mind beyond their ego. It abides in the West and is associated with water. It can be found as a pattern for many types of clothing.

The Tiger, or Bar (бар), represents confidence and modesty, a pair that seems to dance delicately with one another. It abides in the South and is associated with wind. Tigers can be found around temples,as statues around the nation, and as a pattern for clothing.

The Snow Lion, or Arslan (арслан), symbolizes cheerfulness, happiness, and having a clear mind. It abides in the East and is associated with earth. Snow Lions are around temples and many pieces of religious artifacts.

The spirit banner represents one’s soul. Back in the day, you would carry your banner with you as a warrior, and it would be like your war flag. You would post it outside a cave if you were, ahem, busy with a partner, but otherwise, it was near you almost all the time. Chinggis had one, but it was lost so many years ago. You can find the banners at ovoos, on the currency, and on signs and as symbols for shops.