This post is part of a four-part series on Mogolian Naadam (Three Manly Sports). Naadam is a festival traditionally held within the first half of July every year in Mongolia. You can read the other sections here: Horse Racing, Wrestling, Ankle Bones.

The three manly sports build better soldiers. Since the Mongolian armies were well known and feared for their horse-back archery skills, it should come as no surprise that archery is the last of the trio. The archery is standing, however, and not done on horseback for Naadam.

The most important piece of equipment for this sport is the Mongolian bow. You cannot simply buy yourself a bow from a shop; you must have one custom made for your stature. Each bow is built specifically for its archer, so you cannot borrow a friend’s bow unless you want to struggle with firing it correctly. The bow is usually made of wood (although there are some made exquisitely from the horns of animals), with a removable thread that slips into Y-shaped joints at the end of the bow. I believe the correct term is a compound bow. While I am not skilled enough to describe proper firing techniques, or how the bow and shooting differs from other regions, the more die-hard archers out there can possibly discern these differences from the photographs in this post. 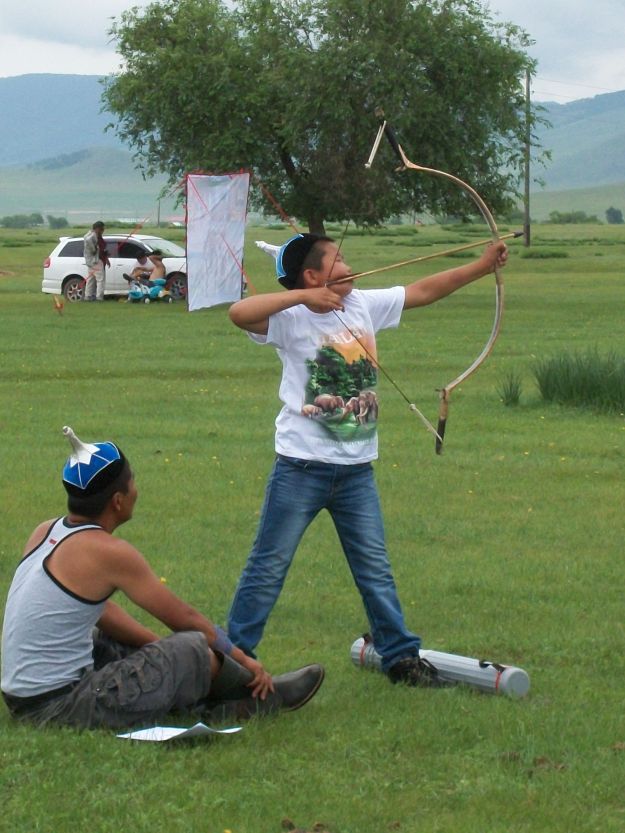 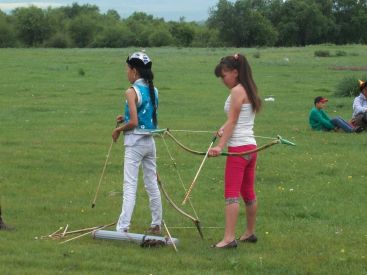 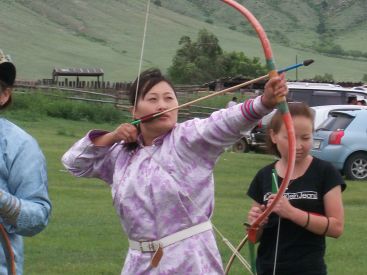 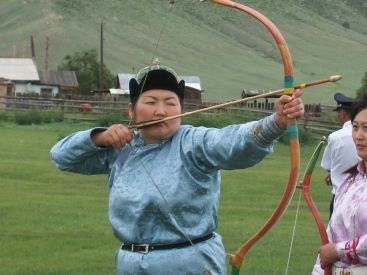 Men, women, and young people can all participate in the archery competition. Men only compete with men, women with women, and so forth. There are lines set up for each group, while a small set of cylinders is set up in a pyramid-esqué formation at the opposite end of the field. Archers take their stance and shoot an arching shot, so that the arrow rises and falls onto the ground-level targets (unlike raised bulls-eye targets you see frequently in archery competitions). You accumulate points based on the number of cylinders you can knock over.

Some families have a long tradition of archery. One such family, in the village I lived in for training, has three generations of archers. The grandfather, now retired, set up a horn-bow factory. The father and mother both compete on the national level, competing in the prestigious Ulaan Baatar Naadam. There is also, of course, their little girl, who while still quite young, is learning the family trade.

Men of the Bottle (Poetry)